What started as a dinner party in 2007 turned into some great parties, a lot of fun for everybody, and rockin’ great tunes! Eric and Kelly were hosting two couples from the neighborhood, and their kids were studying music. Lying unused in the living room was an electric guitar, a set of drums, and a piano.

Jeff picked up the guitar and Bob sat down at the drums. Eric joined on the piano, and we played Man on the Moon by REM. We quickly realized we don’t suck, and we might be able to entertain a crowd or two.

We practiced a few times and loaded up a set list. Our debut event was a party over Labor Day in 2007. Great turnout, and the band played all night. More Cowbell was officially an active band! 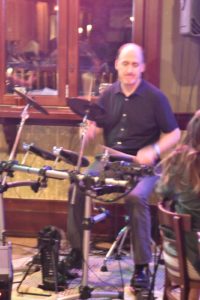 Bob Carroll on the drums. His wizardry on these cutting-edge electronic Roland drums shines through on every tune! 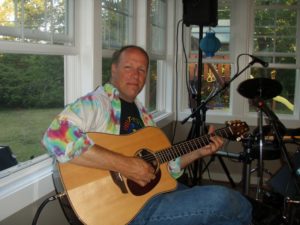 Jeff Barrow – our front man, providing lead vocals and guitar. Count on Jeff for his detailed memory of lyrics, Grateful Dead tour dates, and rockin leads throughout our repertory. 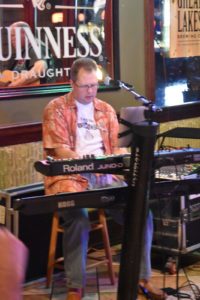 Eric Thorsen – on keyboards and backup vocals. Eric has a passion for tech and geeks out on cool gear. A two-deck keyboard stand supports a Korg m50 synth for basic keys, and a Roland Juno-D has awesome voices like “honky tenor” for Van Morison tunes, a flute voice for California Dreamin’ and Wicked Sitar for Mother’s Little Helper by the Stones. Eric manages “the beast” our rolling gig box with 16-channel Mackie Mixer with onboard effects and support for recording connections.